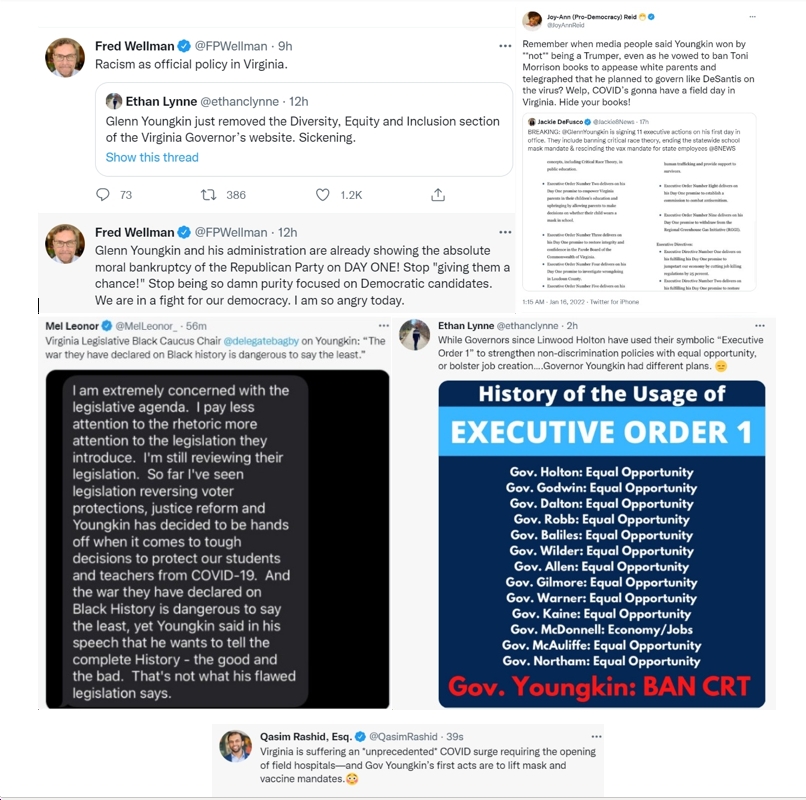 “Glenn Youngkin and his administration are already showing the absolute moral bankruptcy of the Republican Party from DAY ONE! Stop “giving them a chance!”

See below some reactions to Glenn Youngkin’s early actions as governor, including extremely ill-advised (not to mention questionable and dishonest) executive orders/directives to rescind mask and vaccine mandates, remove Virginia from the Regional Greenhouse Gas Initiative, dismiss the Parole Board, “investigate wrongdoing in Loudoun County”, “reduce job cut regulations by 25%”, etc. As Joy-Ann Reid says:

And as the Virginia Democratic Party puts it:

â€œGlenn Youngkin’s day one program is divisive and dangerous and will set us back. At a time when we need a governor to guide us through this pandemic, Youngkin’s top priority is rolling back the protections that will put our children and the Commonwealth at risk.

And Fred Wellman nails it:

â€œGlenn Youngkin and his administration are already showing the absolute moral chapter 7 v. chapter 13″}” data-sheets-userformat=”{“2″:4224,”10″:2,”15″:”Arial”}”>chapter 7 v. chapter 13 of the Republican Party from DAY ONE! Stop giving them a chance! Stop being so damn focused on the Democratic candidates. We are fighting for our democracy. I am so angry today.

See below for more reactionsâ€¦

[COLUMN] Can bankruptcy change your life for the better? —